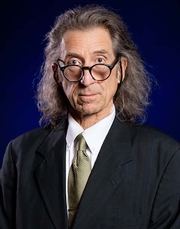 SIS 315 Studies in Global Intelligence I

He is a Fellow of the Society of Air Force Clinical Psychologists, Society of Personality Assessment, and Inter-University Seminar on Armed Forces and Society.  He also is a member of the Association of Former Intelligence Officers.

At Embry-Riddle, Professor Bloom has been Department Chair, Social Sciences; Dean, College of Arts and Sciences; Chief Academic Officer; and Vice Chancellor for Academic Affairs before returning to a professorship in social sciences.

Professor Bloom's scholarship is frequently utilized by international mass media to facilitate understanding of contemporary issues and events.  His International Bulletin of Political Psychology (IBPP) at https://commons.erau.edu/ibpp archives short articles and interviews via keyword searches and tweets via Twitter (@IBPP3).

License 183
State of New Mexico Board of Psychologist Examiners, Clinical Psychology (1977-retired as of 2013)

Diploma 3928
American Board of Professional Psychology, Clinical Psychology  (1987-retired as of 2013)