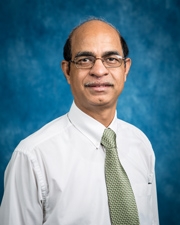 Dr Sudesh has joined Embry Riddle in 2014 as a visiting Assistant Professor and in 2017 he was promoted to Assistant Professor. He has taught all introductory physics courses at Embry Riddle. He has co-instructed laser engineering at the college of optics and Photonics (CREOL), University of Central Florida (UCF).

Dr Sudesh has an extensive research experience. Soon after graduating from Indian Institute of Technology, Delhi he joined Indian Space Research Organization (ISRO) as a Scientist/Engineer, where he worked on design and development of Scene Simulators to test and validate remote sensing telescopes designed and developed by ISRO. After his PhD in crystalline laser materials from Macquarie University, Australia he worked as a prestigious Japan Society for the Promotion of Science (JSPS) research fellow at Tohoku University (TU), Sendai, JAPAN. During his tenure at TU, he accomplished, for the first time, laser demonstration of efficient Tm, Ho:LuLiF laser crystal. This crystalline material became a material of choice for NASA Langley Research Center, Virginia’s (LaRC) remote sensing optics group. Soon after finishing JSPS Fellowship he joined NASA LaRC, as a physicist representing Science and Technology Corporation (STC).  He was instrumental in setting up a part of the state-of-the-art diode characterization facility at NASA, LaRC.

After leaving NASA, LaRC he worked at Raydiance, Inc as a laser physicist and then at CREOL, UCF as a research assistant professor. He was the technical lead for a Department of Defense Joint Technology Office (JTO) funded high power fiber laser program at the College. At CREOL he was co-supervisor for one post-doc, 3 PhD students, and several REU students. He is still in touch with his former colleagues at CREOL to collaborate. In 2016 he received a grant from ERAU’s Office of Undergraduate Research (OUR) for one of his Space Physics (SP) undergraduate to do research in the CREOL’s high power laser development laboratory. It was a very positive experience for the undergraduate and they together published one international conference paper and one discovery day presentation.

He is a member of SPIE, OSA and CUR.

Dr Sudesh is married to his wife for 28 years with two boys. He enjoys spending time with his family. In his spare time he practices yoga, cycling, treadmilling, gardening, and watches his sons’ college, high school and club soccer games.

Japan Society for the Promotion of Science (JSPS) Fellow