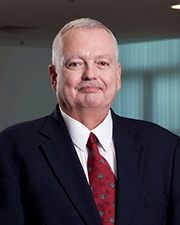 On 1 January 2017, Dr. Bobby McMasters was appointed Program Chair of the Embry-Riddle Worldwide B.S. in Interdisciplinary Studies degree program and Statistics & Computer Science Discipline Chair. Bobby’s road to Embry-Riddle started in 1996 when he and Mr. Jay Price founded the Altus AFB campus. Bobby and Jay managed the Operations and Academics for the new campus until a full-time Campus Director was hired.  In 2002, Jay became the Center Faculty Chair for the Nellis AFB campus, retiring in April 2004 with Bobby replacing him.  In 2006, Bobby was hired as a full-time faculty member in the MSTM program, in 2010 he was appointed Associate Dean for the College of Business and in January 2015, he became Interim Dean.  In March 2016, Bobby returned to the Worldwide faculty as an Associate Professor in the College of Arts & Sciences, Department of Mathematics, Physical & Life Sciences.

Bobby's contributions to Worldwide include pioneering the Macromedia Breeze effort (today known as EagleVision), the High School Dual-Enrollment programs in Arizona and Nevada, and the USAF Community College of the Air Force, Air University - Associates to Bachelors Cooperative Category I effort. In 1979, Bobby graduated with a BSME from Oklahoma State University. He graduated with an M.Ed, and Ed.D, from the University of Arkansas (Fayetteville, 1993 & 1995) and holds a MAS from Embry-Riddle Aeronautical University (2005). In addition, he is a Registered Professional Engineer (Texas, 1988) and certified secondary education teacher in Mathematics and Physical Sciences (Nevada, 2010).