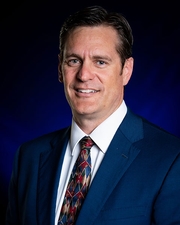 Curtis James is Professor of Meteorology and Department Chair of Applied Aviation Sciences at Embry-Riddle Aeronautical University (ERAU) in Prescott, Arizona. He has taught courses in beginning meteorology, aviation weather, thunderstorms, satellite and radar imagery interpretation, atmospheric physics, mountain meteorology, tropical meteorology and weather forecasting techniques for over 16 years. He has also served as Director of ERAU’s Undergraduate Research Institute and as faculty representative to the university’s Board of Trustees. He participates in ERAU’s Study Abroad program, offering alternating summer programs each year in Switzerland and Brazil.

He earned a Ph.D. in Atmospheric Sciences from the University of Washington (2004) and participated in the Mesoscale Alpine Programme (MAP; 1999), an international field research project in the European Alps. His research specialties include radar, mesoscale, and mountain meteorology. He earned his B.S. in Atmospheric Science from the University of Arizona (1995), during which time he gained two years of operational experience as a student intern with the National Weather Service Forecast Office in Tucson, Arizona (1993-1995).

Dr. James is a native of Arizona where he currently resides with his wife and five children. He is active in his community, having served on the Prescott SciTechFest Advisory Committee and as a Board Member for the Children's Museum Alliance, Inc. On his spare time, he enjoys weather watching, backpacking, camping, fishing, caving, mountain biking, acting, and music. He is an Eagle Scout and serves as the scoutmaster for a local scout troop.