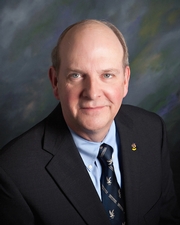 Dr. Frank Ayers has returned to his position (as of 1 July, 2019) as a tenured Professor of Aeronautical Science at the Daytona Beach Campus. He is an active pilot and holds both the ATP and CFI ratings. He is an experienced aviation safety professional as well as a lifelong professional aviator. He, and his wife Debbie, are the proud owners of a beautiful 1976 Cessna Cardinal. Dr. Ayers joined the university in the year 2,000 as an assistant professor, after a 26 year career in the US Air Force.

For the last ten years (September 2009 to June 2019)  he was privileged to serve as the 7th Chancellor and serves as Chief Executive Officer of the Prescott Arizona campus, of Embry Riddle Aeronautical University.  As chancellor, he oversees a full range of academic, operational and professional activities, and sets strategic direction in academics, business operations, enrollment management, academic support, financial aid and student life. His other responsibilities include leadership at the University Cabinet level, philanthropic initiatives and external relationships with government and industry.  Dr. Ayers is a professor of aeronautical science.

During his tenure, the Western Campus of Embry Riddle Aeronautical University, has experienced simultaneous growth in the quantity and quality of all aspects of academic and co-curricular life. The campus has increased enrollments by over 50 percent in the last five years while increasing entering student academic profiles, first year retention, diversity and four and six year graduation rates significantly. With the addition of nine new academic programs, seven intercollegiate sports, the nation’s first and only College of Security and Intelligence, and the recently created School of Business, the campus has matured into a premier Aerospace and STEM university.  With the unwavering support of the University Board of Trustees, the Prescott campus has been transformed by several new academic, athletic, and residence life facilities.

Previously, Dr. Ayers was chairman of the flight training department at the University's Daytona Beach, Florida Campus. In that position, he managed a staff of 250 personnel, training more than 1,000 students annually, and flying more than 70,000 flight hours per year. Prior to joining Embry-Riddle, Ayers was in the U.S. Air Force for 26 years, serving as a B-52 instructor pilot, commander of a B-52 Training Squadron, Support Group Commander and Chief of Joint Military Education Policy at the Pentagon, among other assignments. He earned an Airline Transport Pilot certificate, with type ratings in the Boeing 757 and 767, and is a certified flight instructor. Ayers has logged more than 6,500 flight hours in a wide variety of aircraft types.

Dr. Ayers received a B.A. in History from Virginia Polytechnic Institute, an M.S. in Aviation Management from Embry-Riddle and an Ed.D. from Nova Southeastern University. He is a graduate of the Harvard University, Senior Leaders in Government course and the University of Southern California, Aircraft Accident Investigation Course.

Dr. Ayers is an elected member of the National Association of Intercollegiate Athletics (NAIA) Council of Presidents and is President of the Yavapai Regional Medical Center (YRMC) Board of Electors.

Dr. Ayers is the 2013 inductee in the Virginia Polytechnic Institute, Aviation Hall of Fame, for notable achievement in the fields of aerospace and aviation. Additionally, he was named the recipient of the University Aviation Association's 2005 Frank E. Sorenson Award, for "the professional educator who has made substantial contributions to the field of aviation research and scholarship."

Dr. Ayers has been married to his wife Debbie for over 43 years and they have two married sons, Mike (Stacey) and Clif (Stephanie) , and three wonderful grandchildren.

Ayers, F. (2009). Student Perception of the Validity and Reliability
Of University Flight Training Assessment, submitted to the Collegiate
Aviation Review (CAR) a juried publication of the University Aviation
Association

Ayers, F. (26 March, 2009) Making the Business Case for ADS-B
In Your Organization. Invited to present at the Aviation Week
Management Forum on ADS-B & Next Gen Air Traffic Modernization,
Washington, DC

Dr.Ayers is the Principal Investigator for the FAA Industry Training Standards (FITS) program. He is the lead researcher and project manager of a one million dollar, three and one half year grant from the Federal Aviation Administration. Professor Ayers supervises eight researchers at two separate institutions plus two graduate assistants. He coordinates the efforts of the FAA, four major general aviation manufacturers, and three major universities.

Dr. Ayers was an invited member of the FAA Technically Advanced Aircraft Safety Study. The final report of this group of industry, government, and academic experts identified root causes and interventions for a string of 13 accidents over a two-year period in the Cirrus and Lancair aircraft. The recommendations of this study endorsed the FITS training philosophy and execution and provided valuable insight for the FITS team.

Dr. Ayers is the 2013 inductee in the Virginia Polytechnic Institute, Aviation Hall of Fame, for notable achievement in the fields of aerospace and aviation. Additionally, he was named the recipient of the University Aviation Association's 2005 Frank E. Sorenson Award, for "the professional educator who has made substantial contributions to the field of aviation research and scholarship."

National Award Winner: Professor Ayers is the recipient of the 2005 University Aviation Association (UAA) Frank E. Sorenson Award. This national award is presented for research and publication excellence and was presented at the UAA National Convention in September of 2005.

National Recognition: Professor Ayers is included in the eighth and ninth editions of 'Who's Who Among America's Teacher's, published in September of 2004. He was nominated by a former student and formally accepted in June of 2004.

University Wide Award Nominee/Recipient: Professor Ayers is the winner of the 2004 Outstanding Faculty Award, Presented April the 7th 2004 at the '2004 Student Activities Awards Ceremony'. Presented to the single outstanding faculty member at the Daytona Beach campus who 'has provided outstanding support of an organization.'