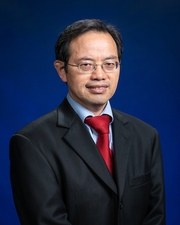 Hong Liu was awarded Ph.D. in Mathematics and MS in Computer Science at the University of Arkansas, Fayetteville in 2000. Currently, he serves as a professor in mathematics and computing at Embry-Riddle Aeronautical University. He taught mathematics, computer science, and data science over past two decades. He served as PI and Co-PI of 14 sponsored research projects including research grants from NSF, US Air Force, and DOE, and published numerous peer-reviewed journal and proceeding articles in partial differential equations, model-checking, robotics, data science, and STEM education. Currently, Liu is working on educational data mining to improve computer-supported collaborative learning environment and enhance the problem-solving competence of adult learners.

2. Supervise and lead the development of the Eco-Dolphin AUV (Autonomous Underwater Vehicle), a REU project in progress sponsored primarily by ERAU undergraduate research grants ($30,000 to date).

5.   Investigated and built a device driver of Kmax data acquisition system that operates a family of NI-DIO cards for Jefferson Lab with the helps of three students 2004 – 2005.

1.   Awarded 5 professional certificates in Software Testing from the summer workshops sponsored by International Institute for Software Testing in Orlando in 2001.
2.   Awarded a certificate of a summer course:  System Development with
UML and Object-Process Methodology from MIT in 2002.
3. Summer  Workshop on Computational Geometry and Applications - DIMACS (Discrete Math and Computer Science) sponsored by NSF, University of Rutgers in 2002.
4.   Awarded 4 certificates in Computational Science Education in the summer workshops of NCSI (National Computational Science Institute, or Shodor), or 2003-2004, one in 2011.
5.   Awarded a certificate in Natural Language Processing and Visualization, summer   workshop offered by CCICADA, a Department of Homeland Security Center of Excellence, 2010.

Member of ACM, Association for Computing Machinery
Member of SIAM, Society of Industry and Applied Mathematics
Member of CUR,   Council of Undergraduate Research
This website uses cookies and similar tools and technologies to understand visitors’ experiences. By continuing to use this website, you consent to Embry-Riddle Aeronautical University’s use of cookies and similar technologies, in accordance with the Embry-Riddle Privacy Statement.