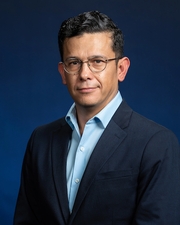 I graduated from the Universidad Autonoma de Chihuahua, in Mexico, with a B.S. in Ecology and later got a Ph.D. in Microbial Ecology from Penn State University. For over 15 years I have studied the taxonomic and functional succession of microbial communities present in animal wastewater treatment systems, agricultural soils, the rumen of cows and during the composting of organic matter. More recently I spent 5 summers working at an underground laboratory in the desert of New Mexico on a project aimed to identify the contribution of background radiation to homeostatic control in bacteria, mammalian cells and nematodes. Here at ERAU I have set up a Space Biology Laboratory where I develop microgravity analogs to help us formulate research-driven hypotheses for biology experiments at the ISS and beyond. In my lab, students learn state-of-the-art techniques to measure differential gene expression and different phenotypic and physiological biological endpoints in response to space-like conditions.