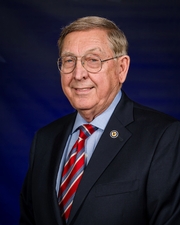 Dr. Bradham is married to Becky Brewer Bradham. They have two children; Natalie and Lisa, and five grandchildren. Dr. Bradham has been associated with Embry-Riddle Worldwide since 2010.

Dr. Bradham has prepared and presented papers on computer integrated manufacturing technology at various conferences and symposia. He is the author of the Society of Manufacturing Engineers Blue Book on Standard for the Exchange of Product Model Data (STEP) Driven Manufacturing which was published in 1998 by the Computer and Automated Systems Association of the Society of Manufacturing Engineers. Dr. Bradham is interested the effects of the environment on electromagnetic propagation and aircraft operations as well as in computer integrated manufacturing technologies.

​Dr. Bradham served 24 years in the United States Air Force retiring as a full colonel. He held multiple leadership and command positions in the Air Force with the Air Weather Service and completed his career as the Chief of the Command and Control Systems Division at the Air Staff. Following his career in the Air Force, Dr. Bradham completed 22 years with the South Carolina Research Authority (SCRA) retiring in 2010 as a Senior Vice-President. During his career with SCRA he led multiple teams in the design, development, and implementation of computer integrated manufacturing systems.
This website uses cookies and similar tools and technologies to understand visitors’ experiences. By continuing to use this website, you consent to Embry-Riddle Aeronautical University’s use of cookies and similar technologies, in accordance with the Embry-Riddle Privacy Statement.