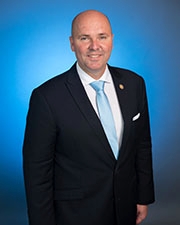 Dr. Ken Witcher is the Dean of the College of Aeronautics, Embry-Riddle Aeronautical University, Worldwide. He’s held this position since April 2013, but has been a dedicated Embry-Riddle faculty member since 2004. In this role, Ken leads a team of 700+ active faculty supporting over 14,000 students enrolled in 13 degree programs.

Ken was an appointed member of the Nevada UAS test site selection panel and previously served as Chair of the Nevada Aerospace and Defense Sector Council reporting directly to the Governor’s Workforce Investment Board.