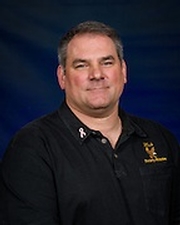 Kanitz has a degree in MAS in Aeronautical Science with a concentration in Management (ERAU); BS in Professional Aeronautics with a minor in Aviation Safety (ERAU); FAA Airframe & Powerplant (A&P) license. Plans on pursuing further education.

Awards and Experience: Kanitz has been working with Embry Riddle since July 2012 as the Director of Academics for the Aviano and Incirlik campuses, and in July 2013, his position changed and he became an Assistant Professor in the College of Aeronautics.

He is a former F-16 crew chief retired from the U.S. Air Force and has spent the last 25 years working with most aspects of flight operations. Kanitz has been working with fighter aircraft for most of his 25 years in the service, but he also has experience with 40 types of NATO aircraft. He has an array of experience with safety, crash recovery, aircraft emergencies, maintenance, and general aviation.

Interests: Kanitz is from Buena Park, CA, and is the last of several children. He has lived in Europe as a military member for the last 25 years, plus one year in South Korea. Now retired from the military, Kanitz lives in Northern Italy. He is married to an Italian and has one daughter. He loves to exercise and instructs an indoor cycling class for the Aviano military community.

Over 30 years in the aircraft maintenance field