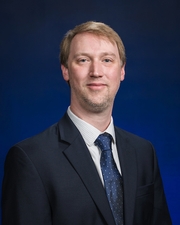 Dr. Deters joined the Department of Engineering Sciences at Embry-Riddle Aeronautical University – Worldwide in late 2014. He became the Program Chair of the Bachelor of Science in Engineering Technology in 2015. His teaching experience began as TA during his time as a Ph.D. candidate where he led discussions, labs, and aircraft design teams. As a postdoc, he taught a graduate class on advanced applied aerodynamics.

His research is in the area of applied aerodynamics where he has authored and co-authored several journal, conference, and technical papers. He has been involved in several consulting projects that have included wind tunnel testing, wind turbine design, and aircraft modeling and simulation.

Interests: Dr. Deters enjoys traveling and visiting the many parks across the country.

​Dr. Deters is a member of the American Institute of Aeronautics and Astronautics (AIAA) and the American Society for Engineering Education (ASEE).