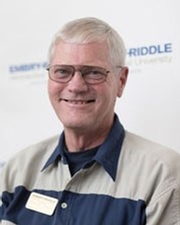 Doug LeVeque currently resides on a 2,400 acre ranch that was homesteaded by his G-Grandfather in the mid 1800's. It is located about thirty miles south of the city of Great Falls, MT. He is an assistant professor and has been married to his wife Ronnie since 1976. They have three children and six great grand children. All are spoiled to death. Doug has taught for several universities including Park University, Montana State University, The University of Great Falls, and of course Embry-Riddle Aeronautical University. He has held the positions of Academic Director of the Great Falls campus of Park University and Director of Academics for ERAU at the Great Falls campus.

Doug served in the USAF from 1974 to 1980 and was last stationed behind the wall in Berlin Germany. He was also stationed at Offutt AFB in Nebraska where he helped develop the electronic counter measures system on the B-1 Bomber.

Being a contractor at one time, Doug built the house he lives in and now builds custom cabinets and frames on the side.